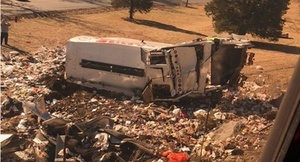 An Amtrak train transporting members of Congress and staff to a Republican retreat in West Virginia struck a truck near Charlottesville, Virginia Wednesday morning, according to multiple sources. No serious injuries were reported on the train.

Bill Kristol must be a psychic.