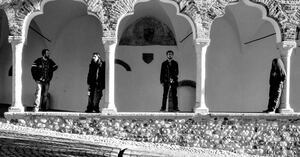 01. Psychedelia/shoegazing, genre-upsetting noises as Gaeilge from Donegal, you say? These might be your lads.

02. Tuath are a collective of musicians that revolves around singer Robert Mulhern and saxophonist Ashley Mobasser, formed in July 2014, and slowly garnering adoring looks across the media room from the likes of Louderthanwar and An Taobh Tuathail.

03. Streaming in its entirety above is the band’s debut EP, Existence is Futile, released this past June, via Bandcamp.

04. The band has just been confirmed for Hard Working Class Heroes festival in Dublin, running from October 6th-8th. For more on the line-up and venues, click here.

Verdict: An odyssey of sound and texture that feels at once fresh and challenging, while peppered with just enough points of reference throughout to reward a broad palette.