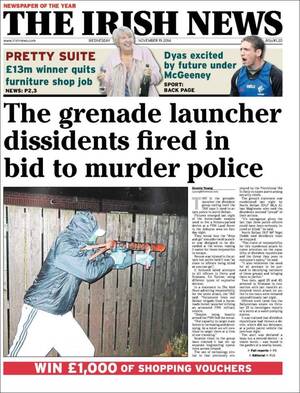 Police officers guarding a notorious interface say they have been left like “sitting ducks” following a surge in dissident republican attacks, including a recent rocket attack.

It is claimed the police presence between Ardoyne and Twaddell Avenue in north Belfast has been scaled back in recent months because of budget pressures on the PSNI.

One officer said while patrolling the area they feel their every move is being watched by dissidents and they fear further attempts on their lives.

A senior police officer said the PSNI was making every effort to protect both its officers and the public.

On Sunday evening a man ran out of Brompton Park with a rocket-propelled grenade launcher before firing it at a PSNI Land Rover close to the loyalist camp at Twaddell.

The lethal device passed through the vehicle’s outer skin but ricocheted off heavier armour on the driver’s side. The officers inside were badly shaken but uninjured.

It was the third attempt to murder police officers at the interface in the past year.