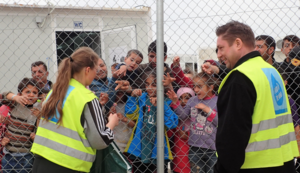 Norwegian lawyer Sofie Railo (left) gives sweets to children through the fence of VIAL, the closed detention facility on Chios island, Greece, where around 1,000 people are detained

You may recall how, on April 4, when the first deportations following the EU/Turkey deal took place, the UN claimed 13 of the 202 people deported hadn’t been given the opportunity to seek asylum.

It was reported that the police officers on Chios island ‘forgot’ the 13 Afghan and Congolese asylum seekers and that there was ‘administrative chaos’ on the island.

It’s since been reported that those 13 people are now being detained in a detention centre in north-western Turkey – built with EU money – and that they will be deported to their home countries.

The Turkish government refused to allow both the UN high commissioner for refugees and The Guardian meet with these 13 people.

Further to this, Human Rights Watch released a new report yesterday, after it gained access to the detention camps VIAL and Moria, on the islands of Chios and Lesbos respectively – where around 4,000 people are being detained in total.

It visited the two camps between April 3 to 9 and found that, of those interviewed by HRW, none had been given a detention order or were informed about the reason for their detention – even though, under Greek and international law, all detainees, including asylum seekers, must be be informed, in a language they understand, of the reasons for their detention and their rights.

HRW also found that those detained on Chios didn’t know they could challenge their detention and had no effective access to lawyers while, as of April 9, there were too few interpreters at the camp.

“On Chios, only one case officer from the Greek asylum service is reviewing asylum claims; as of April 8, he had processed 9 of 1,206 cases of people who had expressed the desire to apply for asylum in Greece. Three more officers are scheduled to arrive at the end of May. The lack of interpreters requires the use of interpretation services over the phone from Athens.

“Five officers from the European Asylum Support Office (EASO) are supposed to arrive on Chios on April 18. Their role, under the EU-Turkey deal, is to conduct preliminary reviews to determine whether asylum applications are inadmissible because the person had or could have applied for protection in Turkey.”

Sofie Railo is a Norwegian lawyer who recently returned home from volunteering on Chios island during the Easter holidays, with A Drop In The Ocean (Dråpen i Havet).

The children are bombarding me with their hopeful voices. In the background, I think I hear something else. Is someone singing? Well, I can’t think about that now. I have to focus on the children as their little fingers push desperately towards me through a brand new fence – topped with barbed wire.

It’s Easter and, instead of having Easter eggs, I have a shopping bag full of chocolate and sweets. I don’t feel like the Easter Bunny but I do hope to see even one child smile through the fence, so I keep on giving out one chocolate here, one lollipop there.

Then someone pulls my arm.

“You have to stop, the police are coming,” one of the other volunteers says. I turn around and see 10 riot police with helmets, shields, batons and more lining up behind us. And the sound of what I originally thought was singing grows louder.

It becomes apparent that the sound is actually that of twenty young men marching through the camp, calling for “freedom”. Fear settles across the children’s faces.

This is my first time in VIAL, the closed detention facility on Chios island.

When I came to Chios to volunteer I expected to work on the beaches and assist people as they arrived terrified, wet and cold, yet happy to be alive.

But during my first week I spent most of my time in the open camps of Tabakika, the port, Daphite, and Souda handing out breakfast, playing with the children, and talking with their parents.

Then, all of a sudden, I found myself passing food through the barbed wire-topped fence in the prison camp that is VIAL.

More than 1,200 people were locked up in Vial when I was there, most of them refugees fleeing war, bombing, arrest and terror. There are of course some economic migrants among them, too.

But the only ‘crime’ they committed – leading to their detention in Vial – was to enter Greece on a small rubber dinghy from Turkey after March 20, the deadline date set down in the EU/Turkey deal.

Greece had less than 48 hours to prepare for the implementation of the EU/Turkey deal which, from March 20, is supposed to see all refugees who arrive in Greece from Turkey detained until they are registered, given the possibility to seek asylum and had their application processed.

But Greece was unable to prepare for such an administrative change in such a short time.

Within two to three days of the March 20 deadline, more than 1,200 people arrived on Chios alone and the only reason the number wasn’t higher was because of bad weather.

Over the next few days more people arrived and, suddenly, more than 1,700 people were locked up in a camp built as a registration camp for a maximum of 1,000 people.

These 1,700 people were detained with hardly any information about what was going to happen to them. The authorities serve one meal a day, sometimes only boiled potatoes, and, at least for the first few days, they didn’t have enough food for everybody. They still don’t have enough water to give out and have no baby milk or diapers.

The second time I went to VIAL, we came to deliver dinner with a volunteer soup kitchen run by a group of Basque people. No guards came to open the gates for us so we decided to make two lines and handed out cups of soup and bread from the car down through the fence where the refugees detained helped us hand it out.

Three times a day volunteers from all over the world came together to make sure the people detained had food. Our presence became even more important when the big organisations such as the UNHCR, Norwegian Refugee Council, Red Cross, Doctors Without Borders, and more, pulled out as a way of protesting against the conditions of the detention camps, not only on Chios, but on all the major islands in the Aegean Sea.

Inside the camp, tension grew amongst those detained because of a lack of food and water, a lack of sleeping space, a dire lack of basic hygiene and, more importantly, a lack of information about what was going to happen to them, an explanation for why they were detained, or how long they had to stay for – all prompting protests, and fights breaking out between different groups of refugees.

The situation become so bad that families, scared, nervous and fearful of what was going to happen, tore down the fences and left the camp with more than 400 people walking down to the main harbour of Chios, deciding that they and their children would be safer sleeping rough than inside VIAL.

At the end of stint, I just walked into the local airport, flashed my passport and was back home in the northern end of Europe within 7.5 hours.

I left Greece feeling Europe has lost its basic values of human rights. I support efforts to stop smugglers, and to find other ways to let refugees that actually need protection have a safe way to apply for asylum.

But this attempt failed because of the process and hasty implementation. When the EU decides to lock people up in prison camps, the EU must at least make sure those inside have covered the basic needs – food, water, medicine and baby milk.

It’s scary to think it only took 3.5 years to go from being the winner of the Nobel Peace Prize to failing to uphold the most basic of human rights – something which supposedly led the EU to win this prestigious reward.

Is the ‘advancement of human rights’ no longer valuable in Europe?

The second thing I learned on my flight home was that 7.5 hours is not enough time to figure out what would actually have been the right answer to questions such as: “If I hurt myself, do you think they will let me go to a European hospital?”

But, despite all my feelings of sadness, anger and disappointment over the way Europe is treating these people, there is one thing I will never forget: the smiles and the waves from the children every time they saw our cars driving towards the camp VIAL.