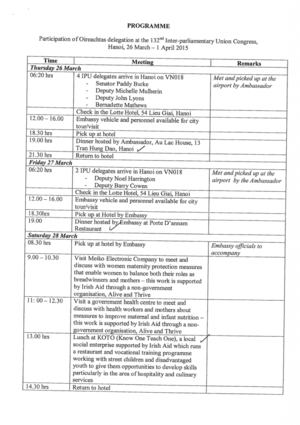 Five Oireachtas politicians went to Hanoi, Vietnam in March of this year for a meeting of the Inter-Parliamentary Union Assembly which meets twice a year.

He explained that the trip cost more than expected, saying:

“There seems to have been a problem with the original flights that had been booked, via London, whereby the Vietnamese government came back to the Oireachtas and basically said that they were block-booking certain flights. So some of the travel arrangements had to be changed at the last minute and a couple of people had to travel out a day earlier. So there was additional costs associated with the flights and then there was extra nights at a hotel. But, in general, the costs were extremely high for this sort of trip, certainly when compared to the last four or five years when costs had generally been kept to a minimum.”

He explained that Deputy Mulherin’s flight – at almost €3,000 – was more expensive than her colleagues as she had to change her business class flight at short notice and return to Dublin for parliamentary business.

All of the politicians stayed in the five-star Lotte Hanoi Hotel.

“It’s in the upper floors of a 65-storey skyscraper in Hanoi. It promises a new standard of international five-star hotel. The standard rooms there offer luxurious marble bathrooms, Hungarian goose feather bedding, menus of pillows and, apparently, a touch of Vietnamese sophistication.”

While every politician on the trip is entitled to claim for substance expenses, only Labour’s John Lyons has done so, so far.

TDs and Senators travelling abroad are entitled to claim a daily “conference rate” which is set by Department of Foreign Affairs – with different rates set for different cities visited.

The politicians can also receive a top-up for certain types of trips – a system which was first set up in the 1950s and one which the Department of Public Expenditure and Reform has refused to reform, despite requests to do so from the Comptroller and Auditor General.