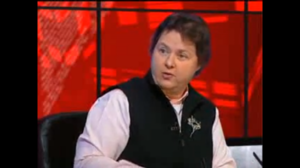 Mary Raftery on Tonight With Vincent Browne on March 10, 2010

In March 10, 2010, a press conference was held in Maynooth during which three bishops – Bishop John McAreavey, of Dromore, Bishop Denis Brennan, of Ferns, and Bishop Christopher Jones, of Elfin – addressed the media.

The press conference was the first since the then Pope Benedict XVI had held a meeting with Irish bishops some four weeks previous, during which the matter of clerical child abuse was discussed.

That evening, Vincent Browne dedicated his show Tonight With Vincent Browne to the conference. On his panel were the late RTÉ investigative journalist and filmmaker Mary Raftery and Irish Times religious correspondent Patsy McGarry.

During their discussion, Ms Raftery talked about how incredible it was to hear a bishop complain about people singling out the church for covering up clerical child abuse.

Mary Raftery: “It’s extraordinary to hear a bishop ask people why people are singling out the church, in the context of asking questions about the cover-up of child abuse. When you look at who the moral arbiters are in society, who are, what is the organisation that we have allowed in Irish society and that have been to the fore in telling us what is right, what is wrong, what is morality, what is sin, what is virtue. And then, we discover, through a series of of reports that they have behaved with the greatest hypocrisy, according to their own rules and then bishops complain, and wonder why they’re being singled out and why it is we are asking these questions about them. It displays, what it displays I think, is an amazing detachment from real life. I mean these people are obviously so disconnected, they’re so, they live in such a rarefied atmosphere, they haven’t the slightest comprehension as to why it is people get exercised over this issue. And I mean I was very struck by the statement when the row broke in Ferns over Bishop Brennan, who indeed was there but who didn’t really say very much, looking for contributions to compensate people, looking for contributions from parishioners. There had been a redefinition almost of what it was that they were involved in, in terms of a cover-up, no mention of a cover-up, no mention of negligence, it was ‘mismanagement and/or lack of resolve’ and the ‘and/or’ really got me and ‘a lack of understanding’. So this is now being minimised, the actual culpability. I was interested to hear Bishop McAreavey, he expressed it as ‘massively misguided’ and ‘massively wrong’ which is a bit of an advance on ‘and/or lack of resolve’.”

Vincent Browne: “In the statement, after the Vatican meeting, they called it errors of judgement…”

Raftery: “It’s absolutely extraordinary. I mean what they, what they respond to is how, the extent to which they’re pushed by what they perceive as public opinion. And they will only acknowledge a little inch, if they think that they can’t get away with it.”

A petition calling on Justice Minister Frances Fitzgerald to hold a full public inquiry into the mass grave in Tuam, Co. Galway can be signed here