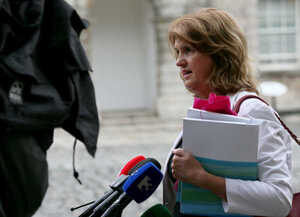 Its hard to know were to begin. A Labour minister announced yesterday that sections of the police force are to be drafted in to set up road blocks and stop workers in cars outside industrial estates.

When I first heard this mentioned on my Facebook and Twitter feeds I assumed it was some kind of left knee jerk interpretation. (I’m prone to them myself) Then I thought it might be FG spin from either within Burton’s department or the Dept of Finance to politically damage Burton. This was before I realised she said this herself on air, though ‘clarifying’ later in the day that she was referring to industrial estates rather than housing estates. Should we be eternally grateful that a Labour minister in only sending cops to harrass the labouring classes at our places of work, rather than at our homes? This is a deeply authoritarian step for any government to take, and as such it is a risk for Labour in further antagonizing ordinary working class people . Though given that Labour is hemorrhaging support, it seems that the party will face a similar fate to other centrist minor coalition partners right across Europe over the last ten years.

This political policing begs some serious questions too. How exactly is a cop stopping cars of people coming out or heading into a days work going to be able to tell if people are signing on the dole while working. Under what legislation can a police force be entitled to demand your personal information on the presumptive basis that all workers coming out of a workplace might be doing the double.

On what information are they using to pick those to stop. Are they going to stop every car, thereby creating long tail backs for workers in and out of work? I cant help thinking of how the RUC used to stop people coming and going to local GAA matches, creating massive tailbacks, often delaying kick off times. Simple harassment of a population to suits the states aim. What’s the difference here?

Are people who work in industrial estates going to have to do what people in the north used to? Head off half an hour early to build in time being held in a traffic queue by the cops? How long does the Labour/FG government think people will put up with this shit?

Joan Burton and the Political Policing of Labour (Soundmigration)