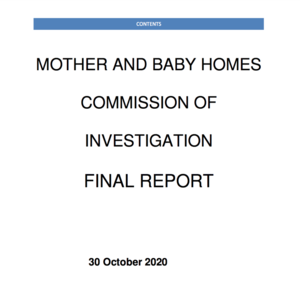 The 2,865-page final report of the Commission of Investigation into Mother and Baby Homes has been published.

From the executive summary:

The story of mother and baby homes in Ireland is complex and its nuances cannot easily be captured in a summary. The Commission’s Terms of Reference cover the period 1922 – 1998, a span of 76 years.

There was great change in that period: massive improvements in living conditions and changes in attitudes to religion and morals. The experience of women and children in the 1920s was vastly different from the experience in the 1990s regardless of where they lived.

The institutions under investigation changed considerably over the period: the two largest institutions were in operation for the entire period but they were very different institutions in 1998 than they were in 1922. Ireland was a cold harsh environment for many, probably the majority, of its residents during the earlier half of the period under remit. It was especially cold and harsh for women.

All women suffered serious discrimination. Women who gave birth outside marriage were subject to particularly harsh treatment. Responsibility for that harsh treatment rests mainly with the fathers of their children and their own immediate families. It was supported by, contributed to, and condoned by, the institutions of the State and the Churches. However, it must be acknowledged that the institutions under investigation provided a refuge – a harsh refuge in some cases – when the families provided no refuge at all.

Improvements in society generally and in the institutions came gradually. Significant changes included the introduction of free postprimary education in the 1960s and the changes consequent on membership of the then EEC from 1973. 1973 also saw the introduction of the Unmarried Mother’s Allowance; this was the first time a direct State payment was available to assist an unmarried woman to rear her child in the community.

A separate report of the confidential committee to the commission can be read here.

Early contact from Tuam Babies family members, say they have left the meeting with the Minister for Children saying “they are appalled at report” and “this is a white wash”. #tuambabies #motherandbabyhomes

“No evidence that the church made unmarried mothers go into the homes” says sibling of Tuam baby, who is in tears over “white wash report” #tuambabies #motherandbabyhomes

Some initial reaction to Taoiseach Micheál Martin and Minister for Children Roderic O’Gorman’s meeting with survivors of mother and baby homes via a webinar, ahead of the final report of the Commission of Investigation into Mother and Baby Homes being made available to the wider public. 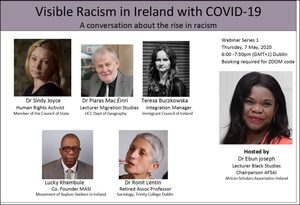 On Thursday at 6pm.

A live-streamed Zoom webinar will be held to discuss Covid-19 and vulnerable or marginalised groups.

“At the onset of the COVID-19 pandemic, the coronavirus appeared to be an ‘equal opportunities’ virus that affected everyone in its path. Weeks into the lockdown in Ireland and around the world, we see marginalised and vulnerable communities in society most affected, exacerbated by underlying racism.

“While COVID 19 did not create racism and socioeconomic inequality, it has made the disparity in the Irish society between those at the top and bottom of the racial and economic ladder noticeable.

“This conversation in Ireland is to bring us together to discuss what we are observing locally and globally about the impact of COVID 19 on vulnerable groups.”

Register for the webinar here

Figures obtained by RTÉ News show there are 1,700 people in direct provision who are sharing a bedroom with one or two non-family members.

This is despite advice from Chief Medical Officer Dr Tony Holohan, who said if someone is sharing sleeping quarters with people who are not part of the same family it is not possible to social distance.

Figures show that up to 30 April there were nine clusters of Covid-19 in direct provision centres across the country.

Previously: No Room To Isolate