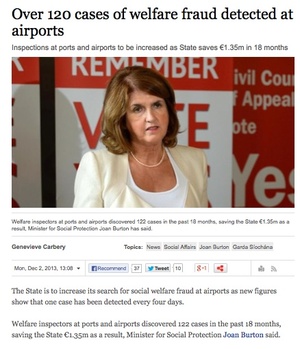 The latest Irish Times piece backing up Joan Burton and her soft-focus attempt to come across as some sort of benign Irish Thatcher as she cracks down on “welfare tourism” is breathless in its promise, giving us a statistic that “one case has been detected every four days.”

It then goes on to produce Burton’s most fantastic, and transparently made-up, claim.

Welfare inspectors at ports and airports discovered 122 cases in the past 18 months, saving the State €1.35m as a result, Minister for Social Protection Joan Burton said.

Firstly, “discovering” one case every four days is entirely irrelevant, as you’ll soon find out. And the €1.35 million in savings is based on “estimates (of) future payments the welfare recipients would have received if they were not detected,” according to the Department.

That is to say – in Anglo parlance – that the Department “pulled the figure out of their arse.” They stuck their finger in the air and put 122 cases together, and came up with €1.35 million out of nowhere.

By this point most readers would have headed on over to theJournal.ie to engage in a flurry of comments about ne’er-do-wells too lazy to work.

A shame, because if they read further they’d discover that the 122 cases led to a whopping FIVE prosecutions.

And the concrete, non-pulled-out-of-the-arse figure for money recovered by the state? €54,000, or an average of around €11,000, give or take a claimable ministerial expense.

That can hardly be a sum Burton considers huge, given that she pays her “special adviser” €35,796 (or the tangible equivalent of three fraudulent social welfare claims) as a top-up to the €92,000 they are supposedly restricted to.

There is a widespread belief, fostered by successive governments, that Ireland’s real enemies are the handful of crooks (and the fact that there have been only five prosecutions shows it’s truly a handful) that check in, sign on and fly out. Those doing the real damage are those who fly into Ireland with a laptop bag, not a holdall.

Welfare tourism a one-way ticket for a go on the spin machine (Philip O’Connor, OurManInStockholm)