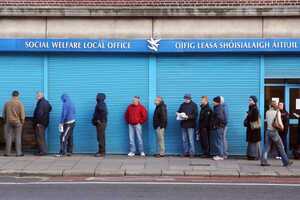 The Irish Times is reporting this morning that the Government is planning to launch a major campaign over the next few weeks to show people receiving social assistance that they would be better off if they worked.

“Research commissioned by Minister for Social Protection Joan Burton estimates at least 75 per cent of people on welfare could increase their income by about 50 per cent by obtaining a job.”

“Under the “Better off in Work” campaign, thousands of welfare recipients will receive letters showing what their take-home pay would be after tax compared to their benefits.”

“An online tool has also been developed which will allow anyone on welfare or in low-paid employment to compare their take-home pay at a number of salary levels compared with welfare benefits.”

So good of them.

Just 3% of dole recipients ‘better off’ without a job (Carl O’Brien, Irish Times)

I wonder if the dept. ever saw thisfrom a few years ago….