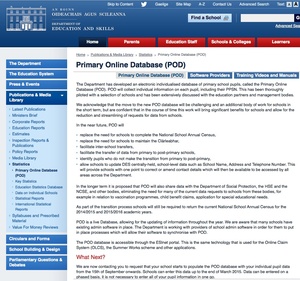 A planned online database for primary school pupils has run into fresh controversy over the use of a narrower set of ethnic categories than those used in the census. Parents of children born outside of Ireland have complained that the only “Irish” category included on the school questionnaire is “White Irish”.
…
“[Father of two adopted children from Ethiopia Brendan] Hennessy, a policy worker with the Society of St Vincent de Paul in Co Cork, wrote to the department last Friday expressing concern that “over 500,000 primary school children and their parents are receiving a form from the department which erroneously suggests that the only category of Irish is ‘white’.”

If you think a POD database of (White-only) Irish children is a bad idea, use this simple form to tell the Minister: http://t.co/SCY5Tq2Fhe

Previously: This Will Go On Your Permanent Record

1/2 We are dealing with several reports of males described as white irish knocking on houses, discussing building works and demanding cash

2/2 driving a white car derived van with writing on the side. Please make any elderly relatives aware and to call 999 if needed #TeamC