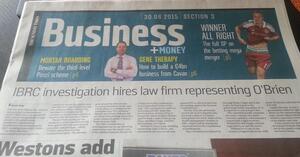 “The law firm William Fry, which is representing the businessman Denis O’Brien in a case against the state, is set to be appointed as legal adviser to the government established commission of investigation into transactions by IBRC, including deals with O’Brien. Law firms that were unsuccessful in tendering for the contract to advise the inquiry were told last week that William Fry was the winning bidder. William Fry declined to comment on the contract or on potential conflicts of interest with its work for O’Brien.””The law firm is acting for the media tycoon in a case launched in June against the Dail committee of procedure and privileges, which O’Brien claims breached his constitutional rights.”
…
“William Fry has a long-standing relationship with O’Brien, and represented him in a recent case against RTÉ as well as in previous proceedings against the Revenue Commissioners. The law firm also previously carried out an investigation into potential conflicts of interest arising from the wind-down of the wealth management division of IBRC, which will be among the issues probed by the commission of investigation.”

Readers may wish to note an article, headlined Boom For Irish Law Firms, from the weekly British legal magazine, The Lawyer on May 28, 1996.

“The influx of telecommunications companies into Ireland has led to the development of telecoms practices in some firms. Dublin firm William Fry was involved in the recent licensing of the second GSM mobile phone system where the Irish-Norwegian consortium Esat Digifone was awarded the licence.”