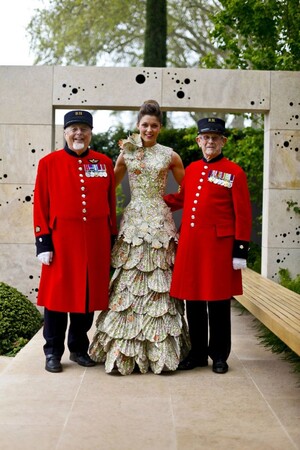 Yes. A rather beautiful frock made out of wallpaper.

Designed by Irish journalist Damian Foxe and unveiled at the Chelsea Flower Show this week.

I was commissioned to make the dress by M & P Investments who are a main sponsor of the flower show and have worked with garden designer Andy Sturgeon. The dress was specifically created to complement Andy’s garden design and is made from an original William Morris design (it’s their centenary this year). I was approached after the sponsors saw a series of wallpaper dresses online that I had made last year for the Financial Times ‘How To Spend It’ magazine where I work as Fashion Director. The dress  took between 30 and 40 hours to make. To be honest I lost count.

‘Anything But A Wallflower’ (Damian Foxe, Mevoque)