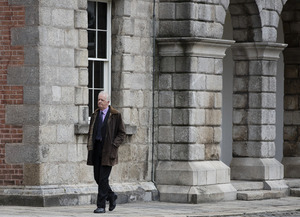 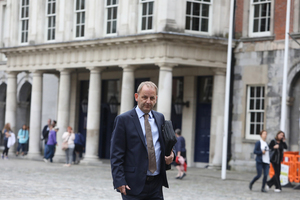 From top: Justice Peter Charleton and Sergeant Maurice McCabe arriving for the first day of public hearing at the Disclosures Tribunal in Dublin Castle

The Disclosures Tribunal, which is investigating claims of an orchestrated smear campaign against Sgt Maurice McCabe, will hear from its first witnesses.

Those scheduled to appear before Supreme Court judge Peter Charleton work with either the HSE, the child and family agency Tusla or the Rian Counselling service. They are: Rhona Murphy, Mary O’Reilly, Mary Tiernan and Laura Brophy.

Their appearance pertains to the tribunal’s term of reference (d) which is:

“To investigate the creation, distribution and use by TUSLA of a file containing false allegations of sexual abuse against Sergeant Maurice McCabe that was allegedly sent to Gardai in 2013, and whether these false allegations and/or the file were knowingly used by senior members of An Garda Siochana to discredit Sergeant McCabe.”

Readers will recall how an allegation was made against Sgt McCabe in 2006 which was
subsequently investigated, a file was sent to the DPP with the recommendation that there was no grounds for a prosecution, and the DPP directed that no prosecution be taken – with the observation that it was doubtful the allegations should constitute a crime at all.

The person who made this allegation is referred to as Ms D in the tribunal.

While the tribunal won’t be re-examining Ms D’s allegation per se, it will be looking at how her 2006 allegation was central to a much more serious false allegation being levelled against Sgt McCabe in 2013 – via a referral to Tusla from Rian counselling – and how gardai subsequently became aware of this serious allegation.

Ms D attended two counselling sessions with Laura Brophy at RIAN, a free counselling service under the remit of the HSE, for unrelated personal matters, on July 24, 2013 and August 7, 2013.

“… During the course of the initial assessment in July 2013, Ms D discussed the 2006 allegation and Ms Brophy accurately recorded it in her own handwritten notes.

… the Children First Guidelines place various obligations on members of organisations such as the HSE to refer allegations of child abuse on to the appropriate authorities.

Within the HSE, if there is suspicion of child abuse or neglect, gardaí may also be notified of the suspected abuse. In this case, it seems that initially, a verbal referral of the actual allegations which had been made in 2006 were conveyed to a social worker, Briege Tinnelly in the HSE by Laura Brophy.

Ms Brophy made a verbal referral which was recorded as follows in an intake record completed by Briege Tinnelly, signed off by HSE line manager, Keara McGlone:

Laura advised that she has a client called [Ms D] … [who] told Laura that she was abused when she was 6 or 7 by [Sergeant McCabe] … it was reported to Gardaí and there was no prosecution from the DPP … [Ms D] was playing hide and seek in [Sergeant McCabe’s] house when [he] put her on the couch, tickled her and touched her inappropriately whilst gyrating on top of her with clothes on … Laura agreed to send in standard notification form.

After making a verbal referral on 9th of August 2013, Ms Brophy completed a typed retrospective disclosure of abuse report on the same date which provided the following under the heading of “Description of abuse”:

According to Ms Brophy, a genuine mistake was made, that in filling out the report to forward to social workers in the HSE, she states that she used the template of a retrospective disclosure of abuse report relating to another one of her clients, Ms Y, and that she mistakenly failed to remove the “Description of abuse” section which related to that client and therefore did not include the correct information about Ms D’s allegation, which she had verbally conveyed to Ms Tinnelly on that day.

This form was sent to the HSE on the 9th of August 2013. It appears that nothing was done, in house, as it were, in relation to this matter until the following year as the file awaited allocation within what became the Child and Family Agency, or Tusla.

However a letter dated the 15th of August 2013 from Keara McGlone was sent to the Superintendent in Monaghan, who at the time was Superintendent [Noel] Cunningham, referring to Ms D by her actual name and to “MMcC”, seeking a meeting with him.

This referred to the criminal investigation that he had carried out in 2007 but did not contain any detail let alone the inclusion of an allegation of digital penetration in the referral, allegedly included in error from the Ms Y file.

Superintendent Cunningham was not on duty for extended periods in or around that time and did not apparently see the letter in this period. He, however appears to have had possession of it and produced it from a safe in early 2017.

It is accurate to record here that both Ms McGlone and the Superintendent have each confirmed to the Tribunal that Superintendent Cunningham did not reply to the letter and that Ms McGlone did not make any further contact with him in relation to this matter.

…in early 2014, some journalists sought to contact Ms D…”