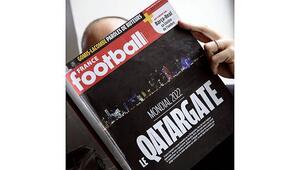 France Football magazine has raised questions about world body Fifa’s awarding of the 2022 World Cup to Qatar,alleging it was tainted by corruption and collusion involving top figures in the game.

To back up its claims, the magazine quoted what it alleged was an internal e-mail in which Fifa secretary-general Jerome Valcke confirmed that the tiny Gulf state had “bought the 2022 World Cup”.

Valcke subsequently claimed a misunderstanding and insisted that the tone of the e-mail was “light-hearted”.

He then kicked a ball boy in the head and went for a spit roast.