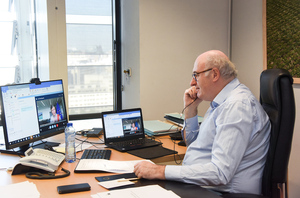 Ireland’s EU Commissioner Phil Hogan has confirmed his candidacy to be the next head of the World Trade Organisation.

And finally, monsieur, a wafer-thin mint…

Speaking in Brussels Mr Hogan said: “I’m exploring the option of being a candidate for the director general of the WTO [World Trade Organisation]

“I think there’s an important amount of work to be done to reform the organisation, to make it more effective and efficient, but also to deal with many of the important trade issues that are bedevilling the international community now arising from Covid-19,” he said.

Phil Hogan confirms candidacy to be next head of WTO (RTE)

EU trade commissioner Phil Hogan confirms he is considering putting his name forward as Director-General of the World Trade Organisation, meaning the incoming Irish government could find itself with a key European vacancy to fill just as the cabinet jobs are being handed out

The European Commission has been urged not to soften its stance on EU rules that would outlaw the export of cyber surveillance tools to despotic regimes worldwide, amid ongoing negotiations between the European Council and Parliament on the new measures.

A coalition of EU human rights organisations have penned a letter to European Commissioner for Trade Phil Hogan, imploring him not to backtrack on the Commission’s original position on the regulation on dual-use goods, which aims to clamp down on exports that can be used in the surveillance of citizens in countries with less than democratic regimes.

Commission urged not to backtrack on EU spyware rules (Euractiv.com)