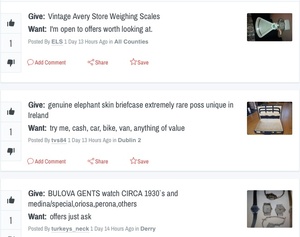 “I’m a UI/UX designer based in Dublin. I spent the last year working on a project I’m very excited about and I would like to let as many people as possible know about it.
Yep.ie is a bartering website where people can swap goods and services online for free.
It was launched in February and it has over 30.000 unique visitors per month at the moment. I know there were other people trying to do the same thing but failed this is why Yep won’t be just a simple bartering website where people post ads.
It will combine social media with bartering + other great features which we will implement over the next few months to make it stand out from the crowd….”