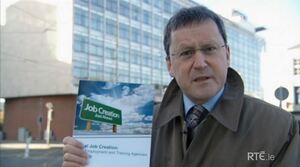 “The deterioration in the position of under 25s in our labour force has been particularly severe. The numbers of them with jobs has fallen by 60% since the start of this recession. That is worse than any other category by far. And this document from the OECD in September says the reason the Government has cut their dole payments is to save money and to make parents more responsible for supporting their unemployed children now up to the age of 26. Which is all well and good, if the parents have money. But in thousands and thousands of cases that is not the case. And having little, or no money, puts you at a very big disadvantage when it comes to searching for jobs.”

RTÉ’s George Lee on Prime Time last night responding to the recent Budget decision to extend the lower dole rate of €100 dole rate to new entrants aged under 25 from next January.

They will get a reduced rate of €144 while those aged 26 will receive the full jobseekers’ allowance of €188.

Miriam O’Callaghan then spoke to Labour TD John Lyons; Moira Murphy, from the We’re Not Leaving campaign; Professor Alan Barrett, of the ESRI and Cllr Hugh Lewis, from People Before Profit. 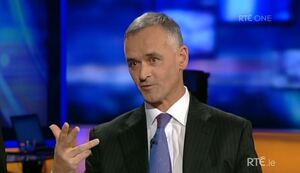 During the debate, Ms O’Callaghan put it to Prof Barrett, above, that the dole cut was brought in as an incentive to make young people find work.

She asked him: “Will it work? If there’s no jobs out there, will it work?”

Prof Barrett replied: “No, probably not.”

“The youth unemployment crisis, we can call it that, but it’s still just the economic crisis. Ok? It is still fundamentally the problem that we don’t have enough jobs to go around and like that, ultimately what we need to do is get the economy starting to move and when that happens the hope will be that jobs start to come around and that young people will be in a position to get those jobs. What happens, having said that, is I think one of the great, great fears and worries that we have is that we know the longer people are out of work, the more difficult it is for them to get back into work. So we have at the moment, we have this current problem of youth unemployment but where we’re really worried about it is that, even if things turn around, it doesn’t necessarily mean that people are going to get, that they’re going to plug back in seamlessly. And what we also know is that even if people get jobs one of the worst things about sort of entering the labour market at the time of a recession is that it can actually affect you for the rest of your career. It’s the scarring effect. It’s not necessarily the case that you’re going to jump back to where you otherwise would have been. You can now spend the entire of your life behind where you otherwise would have been and this is why we worry about youth unemployment. I mean there’s middle-aged unemployment, there’s elderly unemployment but there’s a specific worry about youth unemployment because it can affect people essentially for the rest of their lives.” 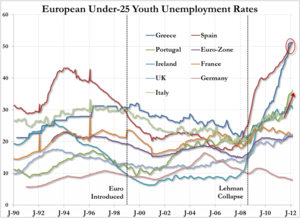