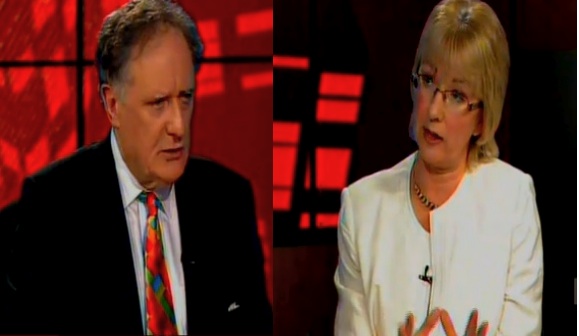 Last night’s Tonight with Vincent Browne – with a panel that included Joan Burton, Dr James Reilly and Trevor Sargent – was a classic. And the highlight was an exchange between the host and Fianna Fail deputy leader Mary Hanafin.

It concerned the €750 million payout earlier this month to bondholders who were not covered by the bank guarantee. Why was the money paid when it wasn’t necessary? To put this into context the amount of money saved by social service cuts in November’s budget was around €800 million.

The obvious question now is who got the money? Best not ask Mary, though.

Mary Hanafin: “What happened in Anglo was appalling. It is absolutely disgraceful and I think we would all agree on that.”

Hanafin: “Because that was the agreement that was reached.”

Hanafin: “Yeah, no, but it was part of the guarantee that was given.”

Browne: “I’m very sorry, Mary. It was out of guarantee. Now why did you pay €750m to bondholders in Anglo Irish Bank who were not covered by the guarantee? Why did you do that?”

Hanafin: “And the reason we gave that guarantee at the time – and this is important because people are saying we shouldn’t have done it.”

Browne: “We’re not talking about the guarantee.”

Hanafin: “The governor of the Central Bank even says it is a systemic bank and should be guaranteed.”

Hanafin: “Well we have obligations to the bondholders because…”

Browne: “What obligations did you have to the bondholders?”

Hanafin: “Because of the agreement that we made two years ago.”

Hanafin: “I know you want to talk about cutting social welfare which was a very different thing to do as well and we accept that, but if you’re going to bridge the gap between what the government is taking in and what we’re spending, unfortunately that’s what had to be done.”

Browne: “You had to pay €750m to bondholders not covered by the guarantee.”

Hanafin. “No, no. I’m picking up on the point of the about social welfare. No, but it was part of the agreement and it had to be done and we had to honour that agreement.”

Browne: “What agreement? Mary you’re not, you’re not… We agreed to guarantee certain bondholders and depositors in the banks and some of those guarantees expired and there was no longer a legal or moral obligation to pay them anything. and … you still paid €750m in the last two weeks.”

Hanafin: “It is a lot of money and I accept that but this is part of our obligations.”

Browne: “Where? What obligations?”

Browne: “It’s nothing to do with the Irish banking system.”

Hanafin: “And to ensure that we can always go back then. The money we’re borrowing internationally, for example, we have to be able to continue to be able to go back, to make sure.”

Hanafin: “But we have to make sure that when we do go back to the markets, which of course is our aim, and to be able to do it fairly quickly, is that we will be able to do that.”

Browne: “Sure they’ll think us crazy.”

Hanafin: Well they’ll certainly think us crazy if we don’t honour our debts

Browne: “But these are not our debts. They’re not our debts Mary. THEY ARE NOT OUR DEBTS! These are the debts of Anglo Irish Bank. We gave a guarantee, the guarantee expired. No longer do we have any obligation and yet we paid. Why?”

Hanafin: “Yeah. Because we gave commitments and we gave a guarantee, and we have to honour that.”