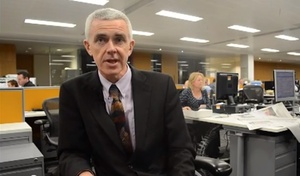 Aingeala Flannery, sitting in for Matt Cooper on Today FM’s Last Word last night, spoke with Paul Cullen, above, Health Correspondent for the Irish Times about criticism of his paper’s report on the the ‘first abortion’ under the new Protection of Pregnancy During Life legislation.

Aingeala Flannery: “Now, the Department of Health has said a termination of pregnancy carried out at the National Maternity Hospital in Holles Street did not take place under the protection of the ‘Life During Pregancy Act’, as the act has not commenced yet. It was reported in the ‘Irish Times’ today that a procedure carried out a number of weeks ago was the first to be carried out under the Act. Dr. Peter Boylan, the Clinical Director of Holles Street, is extremely unhappy about the newspaper report and says that patient confidentiality has been breached. I’m joined now by Paul Cullen, the ‘Irish Times’ health correspondent, and by Simon Mills, barrister and doctor. Paul, if I could go to you first. You wrote this report in the ‘Irish Times.’ What are the circumstances of the patient who had the termination?”

Paul Cullen: “Well, this my the report in the paper this morning. This concerned a termination which took place at the National Maternity Hospital in Holles Street recently and involved a woman who was in the second trimester and whose membranes had ruptured and there was a threat to her life. And the pregnancy was considered unviable. And after discussions involving the woman and a number of obstetricians and other medics in the hospital, a termination was carried out.”

Flannery: “Now, the Clinical Director of Holles Street, Dr. Peter Boylan, is extremely unhappy about this. He says patient confidentiality has been compromised.”

Cullen: “Yes, I heard that interview this morning. I can hear where people are coming from, when they refer to issues around patient confidentiality. I would say that, while there are rights to patient confidentiality, there are also rights for the public to know what is happening. And in this case – and in all the reporting by ‘The Irish Times’ on this issue, over the last year and before – we’ve been trying to put out there what is in the public interest. And I think it would be acknowledged by everyone that this new leglislation and the issues around it and the medical practices within hospitals are of huge public interest, and it would be also of intense interest to see how the new legislation fares, and whether it does bring the clarity it means to bring.”

Flannery: “But Paul, the Department of Health is saying it has nothing to do with the new legislation, that it didn’t take place under the ‘Protection of Life During Pregnancy Act.’

Cullen: “Well, certainly the case is the first to come to light since the legislation went through the Dail, and I think there was a wide-spread belief… which the department has surprised a lot of people today by pointing out correctly that the legislation has not yet been commenced – somewhat surprisingly. But certainly cases like this would come under the provisions of the Act, particularly section 7, which relate to medical cases, physical threats to a woman’s health. So I think it’s justified on the basis of public interest.”

Cullen: Well, because I think people… obviously, this debate about abortion has raged in this country for many decades. I think that there are very strongly-held views on both sides. As a reporter, I’m trying to relay facts to give as comprehensive a picture as I can, and that’s what I tried to do in this article today. I would point out, for example, that our newspaper was the first to report on Savita Halappanavar.

Flannery: “Paul, this is a different case and I’m wondering do you see that this could be distressing for the woman involved, that she may not have wanted her medical details to be splashed across the front page of a national newspaper?”

Cullen: “Yes, I understand, and I have received mail today, for example, from people who are concerned about the report. I understand that entirely. What I was trying to say was that I have to try and balance in my work, and all journalists have to, the right to confidentiality with the right to public disclosure of information which is in the public’s interest. In preparation of this story, we did leave out other details because of that concern. We also went through legal checks for the article, before a decision to print.”