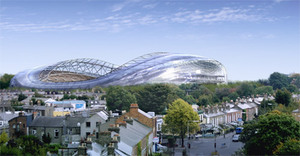 Philip Nolan (Facebook) Major fail at Aviva – stewards know nothing, Gardai worse, Dart service pathetic. Knew it was all too good to be true…

Dermot McMonagle (Letter in today’s Irish Times) “Seated in the south stand upper tier, we were welcomed by a number of decent roof leaks. A lady seated “in the gods” in the east stand upper afterwards agreed with me. We are led to believe that this stadium was designed to be totally weather/rainproofed for all spectators. From my seat the playing area was visible but I was unable to see the tops of the far uprights, due to a monstrous steel support blocking the full view which also limited the viewing of the one screen visible.”