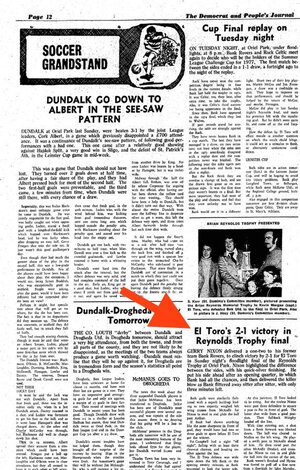 Alex an Italian living in Dundalk, had a chipper with an amusement arcade down the back. It had this brilliant pinball machine called El Toro. in the 70s Alex entered a successful senior football team into the local Summer League. They were good, they were called El Toro. pic.twitter.com/KtAfENgTgi 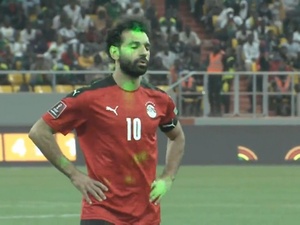 I mean, just look at this. Salah sails his penalty over… and surely anybody would, given the lasers.

Mane scores, Senegal wins the shootout, Egypt out of the World Cup pic.twitter.com/tgHmCmW8uu

Mohamed Salah Misses Penalty After Having Lasers Shone In Eyes, Egypt Are NOT Going To The World Cup (SportsBible) 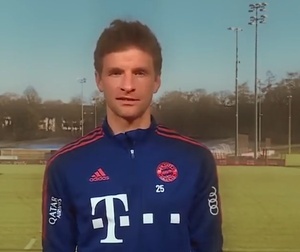 German international footballer Thomas Müller urges a discussion about the health of footballers. 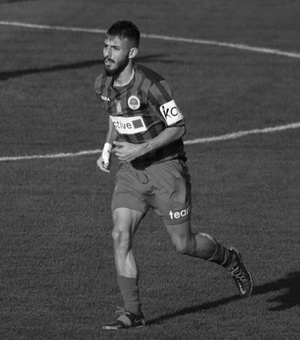 A Greek footballer has died aged just 21 after a cardiac arrest during a match with no defibrillator or ambulance at the stadium.

Alexandros Lampis was turning out for third-tier side Ilioupoli.

But with just five minutes on the clock, reports in his homeland say the attacking midfielder collapsed.

Tragically, there was no way to resuscitate him on the pitch and the ambulance did not arrive at the ground for another 20 minutes.

Alexandros Lampis dead at 21: Greek footballer dies after cardiac arrest with no defibrillator or ambulance at stadium (The Sun) 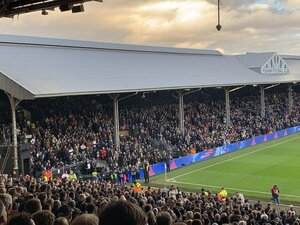 Two separate English football matches had to be halted on Saturday afternoon following further incidents of fans suffering medical emergencies in the crowd.

Around 10 minutes into the first half after the hosts went 1-0 up, play had to be suspended at Fulham’s Craven Cottage as they took on Blackpool when paramedics rushed to a supporter in the Hammersmith Stand that had been taken ill.

Medical staff of both clubs helped the professionals, as fellow fans used flags to block the view and grant privacy to first responders.

Up in the northwest, a similar incident occurred as Oldham hosted Rochdale at Boundary Park in League Two.

About 18 minutes into the derby, with the score tied at 0-0, one of the home team’s faithful suffered a scare in the Main Stand which also prompted professional help.

A few days ago Sunderlands manager Lee Johnstone said the vaccine may be responsible for their goalkeepers recent problems . He has now been sacked

Marcos Menaldo has tragically passed away at the age of 25 after suffering a heart attack in training on Monday.

The Deportivo Marquense defender complained of breathing difficulties during a session while preparing for the new season. 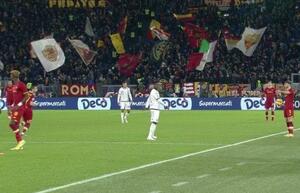 During the match of the 17th round of the Italian football championship between Roma and La Spezia, one of the fans had a heart failure in the stands, according to La Gazzetta dello Sport.

In the 30th minute of the first half, one of the Roma fans became ill – the 23-year-old fan had a heart failure. He received urgent help, he was resuscitated with a defibrillator and taken to the hospital. On the way, he had another attack.

On Saturday in Samara at the end of the Russian championship match Krylia Sovetov – Rubin one of the spectators felt bad. The doctors who arrived in time carried out resuscitation for half an hour, but could not save the victim’s life. According to preliminary data, a 50-year-old man suffered sudden cardiac arrest.

Roma fan revived with defibrillator during the match against Spezi (Italy24News)

Official. Sergio Agüero will announce his future on a press conference tomorrow, together with Barcelona president Laporta and his teammates. 🔴 #FCB

He’s expected to announce his retirement from professional football due to a heart condition. #Aguero pic.twitter.com/snxqFS3BKC 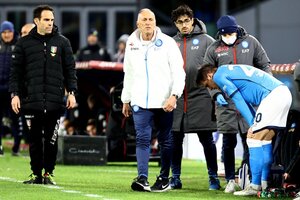 NEW – Napoli midfielder Piotr Zielinski (27) was taken off after 19 minutes in Serie A match after struggling to breathe.pic.twitter.com/03uQQDthMz

Napoli star Piotr Zielinski had to leave the pitch after struggling to breathe in a game against Empoli in the Italian first division.

Napoli midfielder Piotr Zielinski was taken off after just 19 minutes against Empoli as he appeared to be struggling to breathe.

The Pole went to the touchline and motioned to his neck and chest.

Zielinski, who put on a coat and was taken into the dressing room, was then replaced by Lorenzo Insigne.

A statement released by Napoli later confirmed Zielinski had some breathing difficulties, but subsequent tests came back negative. 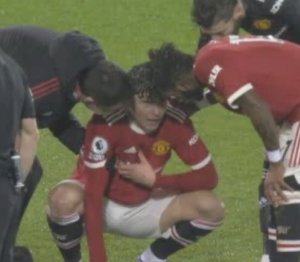 Via Ken Early in the Irish Times:

…A collision, a fright, a problem – thankfully behind us? The times being what they are, the story couldn’t end there. You knew before looking how Lindelof’s collapse was going to be interpreted by the sense-makers and meaning-diviners of social media.

Sure enough, there was a tweet from Trevor Sinclair, scorer of Goal of the Season in 1997, and latterly combining football punditry with vaccine-scepticism: “Nothing to see here #Lindelof”. It was obvious that Sinclair’s post was a reference to his previously-aired suspicion that the Covid vaccines are causing a spate of collapses among football players.

But what about Sinclair’s premise – which you can find echoed by thousands on social media – that these cardiac collapses are becoming more common?

Back in November, Sinclair had been talking to Jim White and Simon Jordan on TalkSport about the collapse of Scotland midfielder John Fleck playing for Sheffield United against Reading. “I think everyone wants to know if he’s had the Covid vacc- . . . ” was as far as Sinclair got before the stream went dead, TalkSport’s producers having apparently hit the dump button.

Refusing to be silenced, Sinclair tweeted: “Everyone I speak to about these heart problems suffered by footballers (which worryingly seem to be happening more regularly) are they linked to Covid vaccines or not??”

No, these alleged heart problems are not linked to the vaccines, according to medical and scientific experts – as though the word of such experts matters in convincing the sceptics…

…But what about Sinclair’s premise – which you can find echoed by thousands on social media – that these cardiac collapses are becoming more common? The claim has been fact-checked by news agencies including AFP and Reuters and found to be false – not that news agency fact-checking can be expected to convince anybody who doesn’t want to be convinced. 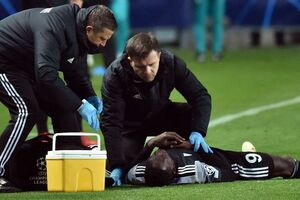 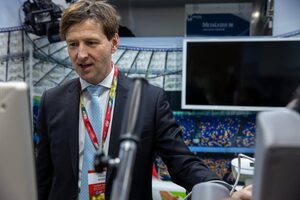 Professor Guido Pieles (above) said the recent spate of footballers collapsing, such as FC Sheriff Tiraspol star Adama Traore on Wednesday night (top), as “terrifying” but a “coincidence”

Professor Guido Pieles, who leads the Sports Cardiology Clinic at the Institute of Sport, Exercise and Health, said there was no evidence that heart problems were occurring in footballers more frequently and he believes any cluster of incidents is a ‘coincidence’.

At present I would say this is still a coincidence,’ Professor Pieles told Sportsmail.

‘Footballers are certainly not the athletes that have the highest volume and intensity of training. Endurance runners, Tour de France cyclists, and rowers they train much longer hours.

‘It cannot be said that in the last year or two years they train more but over the last 10 years that is true.

‘The game has got faster but also people are fitter. If you play football in the Premier League, you have done this since seven or eight years old.’

Just out of curiosity @talksport why did you shut down Trevor Sinclair's question about John Fleck's collapse? pic.twitter.com/fEP5I6XkNB 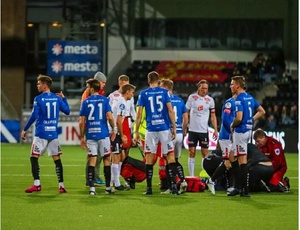 Emil Palsson fell over in the 12th minute of the match against Stjordals-Blink at the Fosshaugane Campus stadium in western Norway.

“Emil Palsson had a cardiac arrest in the 12th minute of play. Palsson was successfully resuscitated, and then flown to Haukeland Hospital for further examination and treatment,” club Sogndal Fotball said in a statement.

In June, a similar event occurred when Denmark’s Christian Eriksen suddenly collapsed from a cardiac arrest during his country’s opening Euro 2020 game against Finland.

Footballer collapses from heart attack during game in Norway (News9Live) 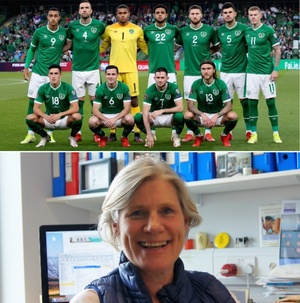 Further to vaccine hold-outs among our senior football team…

“These young men would – I think not necessarily all – seem to be in a bubble of misinformation and are hearing stories that there is no real validity to.

“There is a story going around that the vaccine compromises potency and causes erectile dysfunction or infertility, lower sperm count, which there is absolutely no evidence for.

“These young sportspeople are just so aware of health and needing to protect themselves from major danger, and Covid infection, even if it’s mild, can lead to long Covid, and there’s a risk to others.

“I must admit, I was really surprised by this.

“I just wonder, do they think they are sort of – men can be like that – invincible, that they’ll be okay, that their immune systems are strong enough to fight the disease, and that it’s not going to have long-term effects.”

Immunologist: Footballers’ vaccine stance due to ‘bubble of misinformation’ (RTÉ)