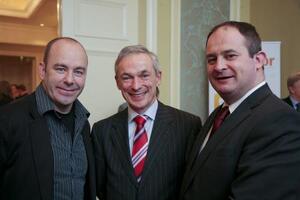 We’re going on Coleman at Large with the economist Marc Coleman (that’s him on the right with Richard Bruton and Random Geezer) at 10pm or so. We’re on to talk about “new media trends”.

Instead we intend asking Marc about the book he wrote in 2007 called ‘The Best Is Yet To Come’. Specifically we want to know if by best he meant the shitstorm of bad stuff that has engulfed every man woman and child in the country?

We’re also bringing in our guitar.

The Homeless Guy With The Golden Voice Gets A Break, A Gig and A Gaff

What’s It All About?