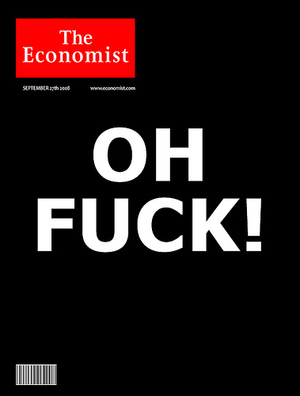 Can you explain What you mean by this?

A farmer goes into an embattled tractor dealer and reaches an understanding on the purchase of an expensive tractor. He goes to his local bank manager to get financing; as agriculture is not doing too badly despite the recession, there is some hope. But the bank has an unexpected response: we can’t give you a loan to buy that tractor, but we can finance one very like it — that we recently repossessed. So banks are in the farm machinery business, at the expense of actual farm machinery businesses.

A recreational golf player reports that it’s a good time to play golf in Ireland. Some local courses that had gotten shabby and run-down are finally having some needed working capital put into them, and now they look good. How did this happen? The banks took them over and will do anything to attract a bit of business, even if it means putting in some additional money.

Then there’s the miseries of the hotel business. Apparently the hotels being run by banks have gotten hold of the forthcoming wedding parties at neighbouring hotels, and are calling the couples directly with offers of a better deal — enough of a better deal to cover the lost deposit at their original booking. And finally, one of the big fish: Arnott’s, is now owned by Ulster Bank (RBS subsidiary) and Anglo Irish Bank.

The Irish debt crisis has put the banks into lines of business that they never planned to be in. With the result that significant sectors of the Irish domestic economy are now being run by them.

There is exactly one sector of the economy that the government has declared off-limits from the process of debt distress, restructuring, and external management.

How many leaving cert points did you say you got?