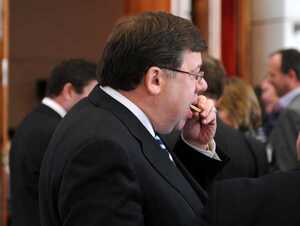 You’ve been listening to Liveline.

Seems the Taoiseach was having a cigarette in the stadium after the Dublin-Cork game on Sunday. Turns out he’s sitting in an open area not designated for smoking.

And a bloke called up Joe. Cowen’s office rang in to RTE to apologise.

‘It could have been another Bradford,” said nobody outside the stadium. A terrified passer by did not add: “You would have thought the leader of the country would know where to smoke.”

Still. It’s good to know he’s back on the cigs. We all are.

Either people are having babies or they’ve taken up smoking again.

In the Broadsheet office we’re back to the 30-day habit we ditched during the ‘golden years’. Karl, meanwhile, has been chewing the little gangsters ever since Larry Murphy’s release.

PPS We know that’s biscuit not a cigarette.

Waiter, There’s Literally A Zip In My Black Pudding