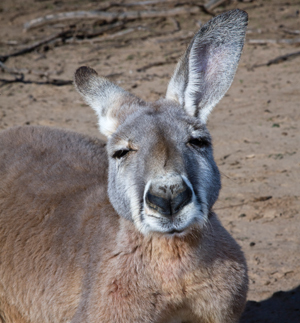 But surely the last?

ITS LLAMAS got loose on a notorious motorway and now Australian Super Circus Sydney stands accused of animal cruelty after owners brought a kangaroo to a nightclub.
Complaints were made to the Louth Society for the Prevention of Cruelty to Animals after the PR stunt last Thursday. Its inspector says she will object to the Earth Nightclub in Drogheda renewing its licence if it happens again.
ISPCA inspector Fiona Squibb explained: ‘The animal was walked around the nightclub amongst people who had been drinking and there was obviously loud music. A circus does not have drunken yobs in it and what happened was a disgrace. It is cruelty to animals. But yesterday, Yvette Schole, who runs the circus with husband Alexander, said the kangaroo ‘had never been to a nightclub before. It is one thing that happened just one time’.
She said it coincided with the club having a circus theme for two nights last week. Earlier this month, the circus made headlines after some of its llamas made it from their base in Tallaght, on to the M50 and the Red Cow roundabout.

And what about the kangaroo that went missing in Cork?