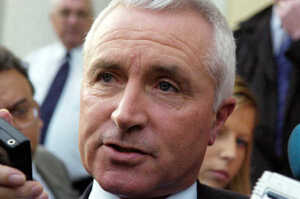 “The TD turned left on a slip road from the N7, heading for Newbridge, and came to Newhall roundabout. There, he turned right and drove the wrong way around the Newhall roundabout before going up the wrong side of the dual carriageway known locally as the Newbridge Road. Other vehicles, which met the TD’s brand new Volvo, were seen swerving to avoid the car. At one stage an ambulance also met him, flashing its lights.”