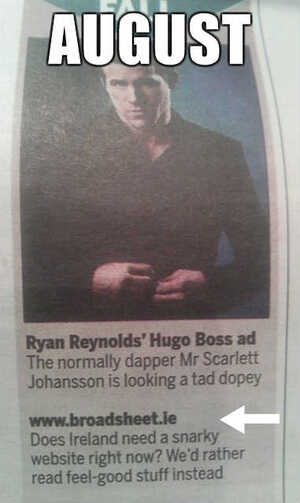 August 1 (Sunday Tribune): We are NOT! 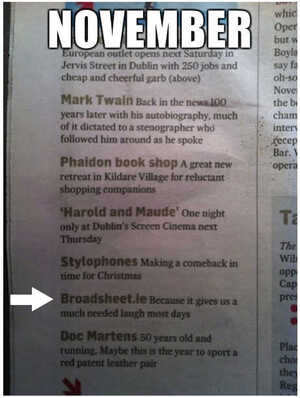 November 5 (Irish Times): We are HOT!

In previous posts, (Irish Times Typo Shame, Irish Times Glaring Typo Fixed (Replaced By Even More Glaring Typo), Top 10 Irish Times Typos of The Last 10 Weeks, etc, etc.) Broadsheet may have given the impression that we thought standards were slipping at the Irish Times. Nothing could be further from the truth.

We also may have alluded to the paper’s central role in the fraudulent promotion of the property industry in Ireland (and its subsequent attempt to control same) during the boom. This was an error on our part.

Finally, our disgust at the €1 million payoff to former MD, Maeve Donovon (and Madam’s current €300,000-plus salary) – as wages at the paper are being slashed and staff let go – was mere sour grapes.

We may be hot but we also know how to say sorry.