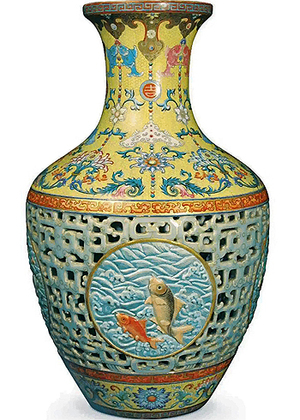 This rare Chinese vase that was found in an attic was recently sold at auction for €50,000,000.

Mystery surrounds the identities of the brother and sister who sold a rare Chinese vase they found in their parents’ loft for €50m.

The pair were clearing out their parents’ house in Pinner, Middlesex, after the elderly couple’s death, when they found the vase.They put it aside, on top of a bookcase, as they continued to deal with the rest of their parents’ property.

They took it to the local auctioneer Bainbridges, in nearby Ruislip, who were in turn excited by the find and valued it at between £800,000 and £1.2m.

However, no one expected the reaction from Chinese buyers, who pushed the bidding up over 30 frenzied minutes to a world record £43m.

By the end of the auction, the price was increasing in £1m chunks as the final few bidders – understood to be mainland Chinese businessmen – vied for the vase

Imagine how many gold toilet brush holders you could buy with that!

This Is The Most Expensive Photograph Ever Purchased

The Face/Vase Illusion In Real Life