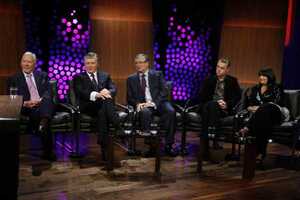 Gay: I am naive but I  had no idea young Gerard was on the reefer

Tubridy: It was cocaine actually, Gay

Pat: Yes cocaine benzoylmethylecgonine. It’s a crystalline tropane alkaloid from the leaves of the coca plant…

Dave: Mick Fleetwood told me it had torn the heart out of the ‘Mac…

Gay: Yes, that as well

Fanning: More like a sugary paste-like substance. Lou looked at me and said coke brought Velvet Underground to the dark side and they didn’t need to go there, you know, because…

Duffy: The crystals reflect in the light but it is the light of death.

Gay: I am naive but I really think Dave you should have worn a tie.

Duffy: I am naiver than anyone in this studio but what about the kids?

Gay: As long as he didn’t drive on the stuff.