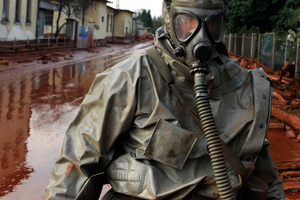 A Hungarian soldier wearing chemical protection gear walks through a street flooded by toxic sludge in the town of Devecser, Hungary on Tuesday, Oct. 5, 2010. Approximately 1 million cubic meters of liquid waste spilled from a nearby alumina plant after a dam burst. Ten residents lost their lives in the caustic flood, the managing director of the operating company was later arrested and charged with criminal negligence. 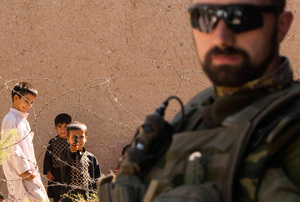 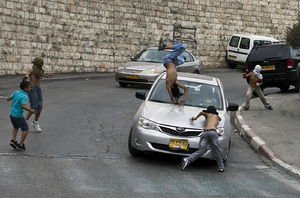 An Israeli motorist runs down a masked Palestinian youth who was standing among a group of youngsters throwing stones at Israeli cars on October 8, 2010 in the mostly Arab east Jerusalem neighborhood of Silwan

A US army soldier with the 101st Airborne Division Alpha Battery 1-320th fires an AT-4 as Combat Outpost Nolen on the outskirts of the village of Jellawar in the Arghandab Valley came under Taliban attack on September 11, 2010. 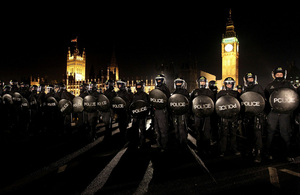 Police officers in riot wear contain student protesters on Westminster Bridge during a large protest over a proposal that would triple tuition fees on December 9, 2010 in London, England. The proposal was later passed.

The final part of the Boston Globe’s Year in pictures.

Mark Zuckerberg: He Mattered The Fourth