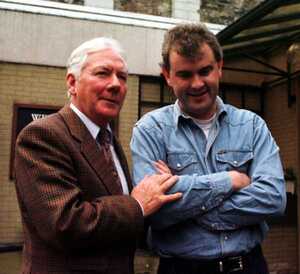 “Gareth O’Callaghan has said that he knew since the Gerry Ryan Christmas party in 2003 that Gerry was an addict because he (Gerry) offered cocaine to Gareth. Gareth pontificates about his horror at this. BUT what did he do about it? How did Gareth show his concern? He did NOTHING. However, now that the postmortem has been carried out with devastating results for Gerry’s family, Gareth decided to speak out about his former friend. In my opinion, Gareth is a coward and contemptible. If he had blown the whistle on Gerry while Gerry was alive, fine! But to do it now that Gerry is dead and his loved ones are trying to cope…that is beneath contempt.”

“I have just this weekend buried my father, he too an addict. A man I loved dearly. I worried about him constantly and I held his hand when he left this life. I begged him to stop. To come back to us, back to his family. Young but destroyed. So, if I may speak on behalf of children who lose a parent to addiction, I think Gareth is showing courage on a level unimaginable. He is discussing the ugly truth about this world. How powerful an addiction can be that you must know you can sacrifice you life for it. Destroy your children’s life. I too am angry, I want Daddy back, I want to speak to him one more time. Beg him again to listen. That’s not going to happen for me but it might still happen for another family. Open discussion is powerful, it changes perspectives, it changes lives. I think Gareth is trying very hard to do this but is being misunderstood.