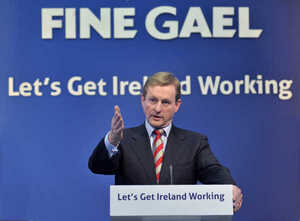 ‘I wil not participate in any programme that Vincent Browne has anything to do with,” says Enda Kenny

Mr Kenny criticised Vincent Browne over comments he had made in regard to suicide – but said this would have no impact on his relationship with TV3, or other proposals it may wish to make.

In October last year, Browne remarked on Tonight With Vincent Browne that ‘Enda Kenny should go into a dark room with a gun and a bottle of whiskey‘

Canvassing in Roscrea this afternoon, Kenny said he hoped the issue of a Leaders’ Debate will be ‘finalised’ by this evening.

When asked would she appear with Vincent again, Joan Burton said: “I don’t remember the last time I was on his show.”