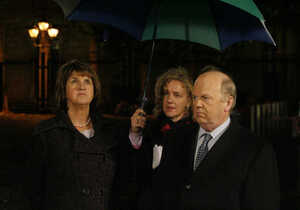 Potential coalition partners Michael Noonan and Joan Burton argued about cutting child benefit on this morning’s ‘Today with Pat Kenny’ (on the sideline was an amused Brian Lenihan).

If you thought the Greens and Fianna Fail were disfunctional…

Joan Burton: “I think Fine Gael need to think about this. Effectively, Michael, your plan is to take about €250 a year, about €21 a month, from a family –”

Noonan: “Could I say something, Joan? You know, you’re into magic bean economics.”

Pat Kenny: “Hang on a second.”

Noonan: “Labour aren’t going to do anything about anything. They’re going to pay more money to everybody. Do you realise the crisis we’re in? What happened to you over the Christmas?”

Noonan: “You were talking about the bailout and the crisis and the country is banjaxed. Do you remember that? And now you have no solution for anything. You just knock the Fine Gael proposals.”

Pat Kenny [aside]: This’ll be a great coalition alright

Burton: “Michael, there’s a lot of big houses all around the country where, inside those houses, there’s actually very little money because people are at the pin of their collar paying their mortgages and the child benefit is a critical income support to put food on the table. I’m just asking you, Michael, to think about this..”

Noonan: “You’re pretending you can fix the economy without doing anything.”

Burton: “Michael, you sound like you’re shouting from Limerick..”