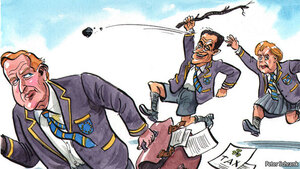 POOR Enda Kenny. Folksy and ruddy-cheeked, the new boy from Dublin was roughed up badly by European leaders during his first outing to Brussels. The Irish prime minister caught the eye of the class bully, Nicolas Sarkozy. Nobody defended the taoiseach; even the head prefect, Angela Merkel, put the boot in.

But why have him being chased by his wife Fionnula and Brian Hayes TD?