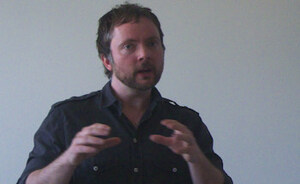 “The Moriarty report is very long, but gripping. It is a little too postmodern for my tastes – since early yesterday its characters have been leaping from the page, eager to offer their own definitive versions of why the story is just so wrong. As always, when it comes to one of the now ritual glimpses into the ‘synergies’ pursed by Irish business and political elites, Marx’s discredited camera obscura notion of an ideologically inverted world makes a return. How else to interpret a cast of characters that presents lying under oath as an opportunity to grow as a person, corruption as an under-valued form of public service, and corporate raiders as victims of a world of prejudice?

“So let’s cut instead to a footnote to the affair. Over the last weeks, the tax exiles O’Brien and Desmond – plus a porn-loving banker, a phone-tapper, a good friend of Gaddafi and a ward of Nama – have been busy putting Ireland First. This alpha list of ‘can-do’ people and ‘top talent’ presented their blue-sky thinking on reform, that is, a cut and paste of reactionary positions on welfare, public service and the pragmatic need for a wee bit more control over the media. Normally, focusing on ‘bad guys’ is a sure way to lose sight of the systemic problem. However, the next time you hear these Dragon’s Den Democrats gush about their liathróidí and the need for the little nimble people to be made competitive, make a big exception.“

Gavan is Lecturer in Media in NUI Maynooth, and a contributor to Crisisjam on Politico.ie.