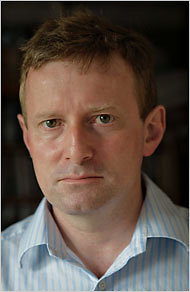 Doom it may concern.

With his high forehead, cruel lips and remorseless logic, he’s put the enigma back into economics.

But who is he?

Here’s six fun facts about Morgan Kelly you can take to the bank!

1. He wasn’t always right. As a young boy he assumed flying cars would be in production by 2000. It’s 2011 and the motor car remains a stricly earth-bound vehicle.

2. At the 1975 Aer Lingus Young Scientist Competition, Morgan entered a Walkman prototype which involved two Marshall speakers in a wheelbarrow. His hatred of authority was born in the RDS that year, say pals.

3. During his freshers term at Trinity he was voted “boy most likely to say ‘I Told You So’.

4. He advised the members of Dublin rock band, The Asshats to change their name. “They, of course, went on to become U2,” he regularly reminds pals.

5. Morgan has been married five times. “I know all about costly mistakes,” he likes to joke with pals.

6. ‘Morgan’s Peers’, his new RTE series starts in the Autumn. “It’s going to a one-man show,” he jokingly predicts to pals.