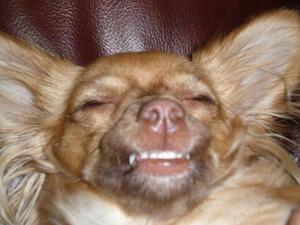 It seems like no matter where you try to draw the line between animals and people, the animals keep sneaking a paw (or hoof) over. They make tools. They have sex for fun. They commit murder. And, says neuroscientist David Linden, they also like to get high:

Animals in the wild will also voluntarily and repeatedly consume psychoactive plants and fungi. Birds, elephants, and monkeys have all been reported to enthusiastically seek out fruits and berries that have fallen to the ground and undergone natural fermentation to produce alcohol. In Gabon, which lies in the western equatorial region of Africa, boars, elephants, porcupines, and gorillas have all been reported to consume the intoxicating, hallucinogenic iboga plant (Tabernanthe iboga). There is even some evidence that young elephants learn to eat iboga from observing the actions of their elders in the social group. In the highlands of Ethiopia, goats cut the middleman out of the Starbucks business model by munching wild coffee berries and catching a caffeine buzz.

The Compass of Pleasure: Bob Dylan and Siberian Reindeer Agree: Everybody Must Get Stoned (David Linden)