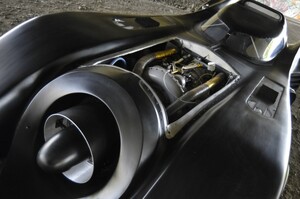 Motorhead Casey Putcsh and his self-built, street legal replica Batmobile. There have been others, but this is the only one powered by an actual jet turbine. From the official description:

The car is a replica of the vehicle from the classic 1989 Batman movie that was directed by Tim Burton starring Michael Keaton as Batman. It is registered and insured for the street and features a military spec Boeing turbine engine that was used in a drone helicopter by the Navy to drop torpedoes on enemy submarines. Putsch taught himself about turbine engines and successfully rebuilt this surplus engine by himself. The engine powers the rear wheels via a semi automatic transmission and is driven like any other conventional production car. The car’s engineering and construction is fully racing derived and can be considered the most extreme exotic car on the planet.

Needs a stealth mode though.

Your Game Of Thrones Throne Has Arrived