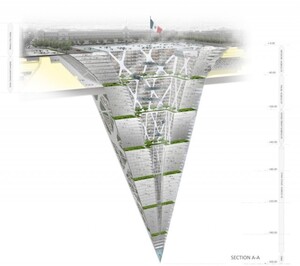 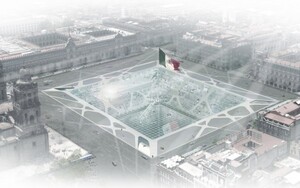 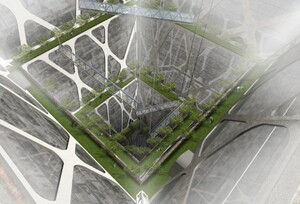 The Earthscraper, designed by BNKR Arquitectura is a proposed inverted pyramid beneath Mexico City’s Zocalo square that would extend underground for 65 stories.

When the Spanish arrived in America and ultimately conquered the Aztecs, they erected their Christian temples atop their pyramids. Eventually their whole colonial city was built on top of the Aztec one. In the 20th century, many colonial buildings were demolished and modern structures raised on the existing historic foundations. So in a way, Mexico City is like a massive layered cake: a modern metropolis built on the foundations of a colonial city that was erected on top of the ancient pyramids that were constructed on the lake.

The design is an inverted pyramid with a central void to allow all habitable spaces to enjoy natural lighting and ventilation. To conserve the numerous activities that take place on the city square year round (concerts, political manifestations, open-air exhibitions, cultural gatherings, military parades.), the massive hole will be covered with a glass floor that allows the life of the Earthscraper to blend with everything happening on top.

Marvel of design or Hive-style necropolis? Either would be good.