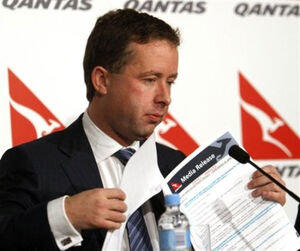 PERTH—Australian airline Qantas Airways Ltd. grounded all its domestic and international flights in response to a worsening labor strike over pay and conditions, in a move that will see flights suspended until Sunday at the earliest.

Thousands of passengers world-wide have been affected, with more than 13,000 booked to fly into Australia over the next 24 hours. Some 108 aircraft were grounded in 22 airports around the world.

Group chief executive Alan Joyce said the strikes had so far cost the company some A$68 million (US$72.8 million).

“I have no choice but to force the issue,” Mr. Joyce told a news conference in Sydney, estimating the decision will cost the airline some A$20 million per day. The airline claims some 70,000 passengers and 600 flights have been affected since the strike actions began.