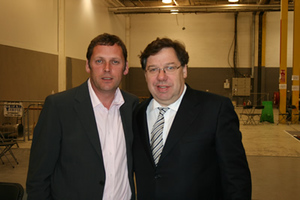 We have taken every effort possible to consistently raise this issue
in the Dail and prevent the payment of €715million to unsecured and
unguaranteed bondholders on November 2nd 2011.

Earlier this week, our Spokesperson on Finance, Michael McGrath called
on the Taoiseach to contact the new President of the European Central
Bank Mario Draghi in a last ditch attempt to stop the payment of
€715million to Anglo bondholders.

We have consistently expressed opposition to this payment and put
pressure on the Government in relation to this matter in recent weeks.
Last week in response to questioning by Fianna Fáil leader Micheál
Martin in the Dáil, it was revealed that the Taoiseach didn’t even put
the issue of securing savings on this bank debt on the table during
the most recent European summit meetings.

We believe that there is a fundamental issue of equity in the European
Union at stake here. Greece has been granted a haircut of 50% of its
sovereign debt held by European banks while the ECB is attempting to
force Ireland to repay in full unsecured, unguaranteed bonds owed by
failed Irish banks currently being wound up.  Applying a 50% discount
on the bond would save Ireland over €350m.

The Government’s efforts in recent months to claim that Anglo would be
repaying the €715m bond out of its own resources have been wholly
misleading. It is the taxpayer who will bear the brunt of this
payment.

During the last election, Eamon Gilmore promised it would be Labour’s
way, not Frankfurt’s way, and Fine Gael said the Irish banks would not
get another cent unless senior bondholders shared in the burden by
taking losses.  Instead, it now appears certain that the €36 billion
of unguaranteed bank bonds in the system when FG / Labour came to
office will be repaid in their entirety, with no losses whatsoever
imposed.

The government has failed utterly to achieve any progress on this
payment despite its clear promises on the issue during and after the
election.

Despite all our efforts the Government has decided to proceed with this payment.