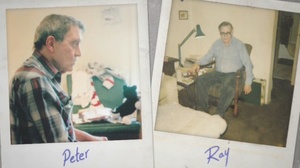 In 1987, Eddie and Mitch moved into a low-rent apartment in San Francisco where, through paper-thin walls, they were informally introduced to their middle-aged alcoholic neighbors, Raymond (a raging homophobe) and Peter (a flamboyant gay man). For 18 months, they hung a microphone from their kitchen window to chronicle the bizarre relationship between their borderline-insane neighbors, accidentally creating one of the world’s first “viral” counter-culture sensations on the underground tape market.