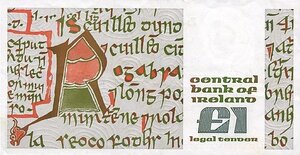 Life after the Euro?

The first thing that must be said is that hopefully the government has a plan. After all, governments should plan for all eventualities. Planning to deal with an eventuality is not the same as willing it to happen and failure to plan can be catastrophic. Sadly, history suggests a coherent, competent and analytically sound plan is not likely to be found in the county’s department of finance.

Secondly, in the event of the euro breaking up, which may be as a result of the cascade outlined above or perhaps due to the German political system not being able to persuade itself or its constituents of the need to foot the bill, there will be significant winners and losers in Ireland.

The first decision that would have been made by the government would be whether or not they would allow a freely-floating currency (which would almost certainly depreciate significantly and immediately), or to put in place some form of managed float. While depreciation would be attractive, in that it would be a boost to exports and therefore assist in putting the country back on a growth path, it would also result in imports becoming more expensive. A third of Irish imports come from the United Kingdom, and in all likelihood the new Irish pound would be weaker than sterling. It would also likely be weaker than the dollar, which given the country’s extreme dependence on imported oil would result in significant increases in the price of petroleum based products.

All of these would rise in price, bringing inflation and penalising both businesses and consumers.

The country would also have to very quickly move to achieve a surplus instead of a primary deficit in government finances. This would be necessary in order to pay down the accumulated national debt. When you consider the pain the country is going through in order to reduce its deficit to three percent over four years it is hard to imagine the wrenching dislocation that would be required to achieve a primary surplus over the span of just a couple of years. And yet, that is precisely what would be required.

Previously: Ireland And The Euro: There Really is No Plan B