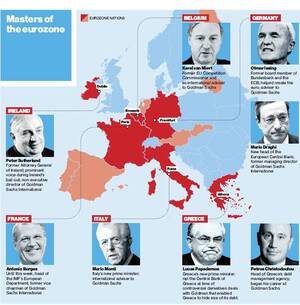 Perhaps the most prominent ex-politician inside the bank is Peter Sutherland, Attorney General of Ireland in the 1980s and another former EU Competition Commissioner. He is now non-executive chairman of Goldman’s UK-based broker-dealer arm, Goldman Sachs International, and until its collapse and nationalisation he was also a non-executive director of Royal Bank of Scotland. He has been a prominent voice within Ireland on its bailout by the EU, arguing that the terms of emergency loans should be eased, so as not to exacerbate the country’s financial woes. The EU agreed to cut Ireland’s interest rate this summer.