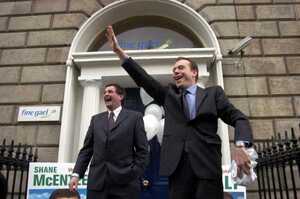 It’s not the first time FG Councillor Darren Scully, (right) the ‘Naasist Racist’ (with Shane McEntee in 2005) has taken on the forces of what he terms ‘political correctness’.

A politican has claimed that a number of young women are getting pregnant solely to increase their chances of being housed by the local authority.

The councillor said a single mother told him she got pregnant so that the council would give her a house.

He even claimed that teens were looking for “advice on how to get pregnant”.

Yesterday, Fine Gael councillor Darren Scully, a father of two, stood over the controversial comments that he first made at Tuesday’s meeting of Naas Town Council.

But other councillors have distanced themselves from Mr Scully’s claims and condemned his views.

“I fully stand over what I said,” Cllr Scully told the Irish Independent. “I said there was a small percentage of women in the town of Naas who are getting pregnant so that they can get up the list and get a council house.”