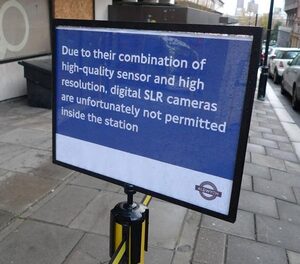 Spotted by photographer Tim Allen outside the disused Aldwych tube station, which recently reopened for tours.

While photography bans are pretty common, the station has decided to only ban DSLRs due to “their combination of high quality sensor and high resolution”. Other cameras are allowed in, as long as they don’t look “big” enough to shoot amazing photos.

The Sign That Made Me Sad: All Day Becon And Sausag