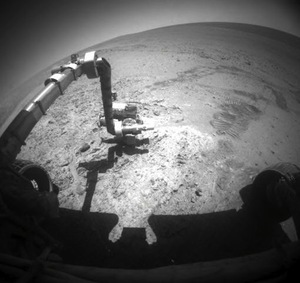 Tired of boring old news from Earth? Consistently failing to make the scene on other planets?

The icon that’s missing from your smartphone is the Mars Images App – bringing you the very latest visuals from the red planet.

On Mars since 2004, NASA’s Opportunity rover has far exceeded its planned mission life and is still making groundbreaking discoveries, such as the recent ‘unambiguous’ evidence that water once flowed on Mars. Developed by computer scientist Mark Powell of NASA’s Jet Propulsion Laboratory, the app also allows you to browse older photos from the rover’s archive.

Free and available for IPhone/iPad and Android phones .