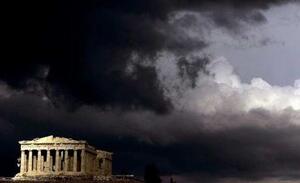 GERMANY HAS confirmed it wants an EU-appointed “budget commissioner” sent to Greece with powers to override its government’s budget policy.
Berlin’s demand would also apply to Ireland and any other bailout recipient that consistently missed the targets set out in its rescue plans, a well-placed European source said yesterday.

The source recognised that Ireland’s bailout was on track but said Berlin was anxious to avoid any repeat of the Greek situation, where the authorities have repeatedly failed to implement promised reforms.

Greece is resisting the pressure from Germany. “Anyone who puts a nation before the dilemma of ‘economic assistance or national dignity’ ignores some key historical lessons,” said finance minister Evangelos Venizelos.

The prospect of an Irish referendum to endorse Europe’s new fiscal treaty hangs in the balance as EU leaders make a final push today for a pact to toughen the enforcement of budget rules.

At issue now for the Government is the principle of adopting an international treaty, which will impose binding obligations on the Dáil and Seanad, without the consent of the people.