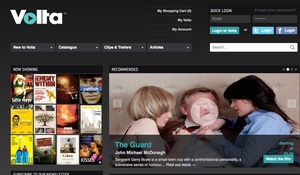 Take a bow, Pedanto the Hilarity Man, who wins a year’s free rentals with Volta.ie.

Dodging a beercan hurled by his alcoholic father (who never recovered from the loss of his wife to cancer) our hero Myles smashes the Sacred Heart picture with a Fender Telecaster and vows to live by no man’s laws but his own. His journey thrusts him into the company of a succession of bulky tongue-tied farmers, office workers with romantic daydreams, and disillusioned IRA hitmen. A carefree Dutch backpacker named Inga casually relieves him of his virginity, but disappears in a stolen ice-cream van while he collects firewood from a beach and gazes at the Poolbeg chimneys. Arriving at last in Dublin, Myles hooks up with Clappers Donnelly, a rumbustious moneylender with a pit-bull terrier and a wide-lapelled powder-blue suit. When he accidentally drives Donnelly’s showband’s minibus into a lake, Myles must deliver a mysterious packet to Blades Standish, the city’s most feared heroin dealer. Will Myles rescue Inga from Standish’s docklands penthouse in time to meet his estranged brother Tom at their father’s funeral? Of course he will. But not before he has explored the bleak underbelly of post-Boom Dublin in a manner that is deeply satirical and yet ultimately redemptive, steeped equally in the mists of a Connemara boyhood and the harsher fumes of a vibrant and lively metropolis on the edge of Europe. Will this do?

‘Angela’s Ashes’ – The Story Of A Wake

The Butcher Boy, The Colleen Bawn and I Went Down to meet up with O’Neil Of The Glen and Ryan’s Daughter. We headed Into The West and met for Breakfast On Pluto, the new hipster coffee bar. Being summer, it was a blistering hot Bloody Sunday morning under a Reign Of Fire.
And, of a Sunday morning the place was full of Disco Pigs from the night before and The Actors from the latest staging of Bloom at the town hall. We were there to meet with Adam and Paul. It was all About Adam. He was no Ordinary Decent Criminal, due to his time as a Borstal Boy. I had only met him Once previously when out with The Magdalene Sisters known locally as The Country Girls. Meeting him by The Rising Of The Moon that night was a cold experience and shaking his hand was as if I’d to Shake Hands With The Devil. It was Nothing Personal since everyone is Some Mother’s Son.
But on this morning, The General flow of the conversation revolved around The Commitments he had made In The Name Of The Father to his beloved Angela (whom he affectionately called ‘Angel’) on her death bed. He was to spread Angela’s Ashes in The Field in Omagh where The Wind Shakes The Barley. Well, Home Is The Hero in This Other Eden north of the border.
Adam led us all out to The Van where Johnny Was waiting to drive us up north as he hummed the tune to Song For A Raggy Boy. Leading with My Left Foot, I hopped into the van. Of course, a few had to see a Man About Dog before we departed.
Adam, The Quiet Man among us, was still as a sleeping Lamb, all the way up north through The Hills Of Ireland which were in need of some Regeneration.
We reached the field and were met by Darby O’Gill And The Little People of the town of Omagh. Adam performed his duties and Kisses were exchanged among us as was the tradition In The Day’s Of St Patrick. Through the wake some had The Craic while others worked The Crying Game. Before Turning Green with all the drink, we climbed aboard the van once again, ensuring not to be Waking Ned as he slept in the back, likely dreaming of Reefer And The Model he saw earlier that week down the Ballroom Of Romance.
Adam no longer On The Edge of despair appeared to have had Five Minutes Of Heaven on saying good bye to his Angela. Johnny started up the van again. And we all headed back the Rocky Road To Dublin.

Here’s Looking At You